The eminent poet, Robert Graves, famously claimed that that there's no such thing as good writing, only good rewriting. I tend to agree. This poem is a rewritten version of one that appeared several years ago in A Guernsey Double, co-written with fellow writer, Peter Kenny. 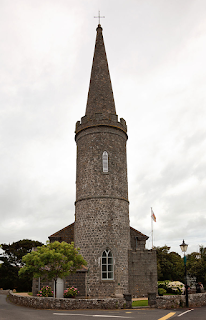 behind the coffin held aloft.

Head bowed, she steps, back ramrod-straight,

from the black car beyond the gate

into the congregation’s hum.

Grief carves a beauty in her face

or highlights what was there before,

unrecognised. She seems to shine,

to have become not less but more,

while others’ faces, at this shrine

to gracefulness, lack any grace.

as one by one the cars depart.

We gather our composure, rise.

She stands a little way apart,

speaks with the priest, says her goodbyes.

Outside, soft rain begins to fall.

Posted by Richard Fleming at 10:40 pm