This rhyming poem is, in part, a homage to the men whose vision and labour built great cathedrals throughout Europe, and, in addition, an attempt to chart the growth of a religion, its abuse by a corrupt priesthood and its eventual decline. 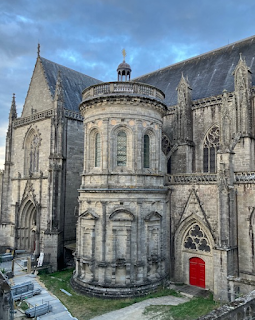 Centuries it took them. Young men

grew old. Their sons, the skills passed down,

above the human ants, nut-brown

and shaped by labour. Four in ten,

The rest, their lungs and backs destroyed

by endless toil, bequeathed their tools

to others: sturdy men, young bulls,

upright and proud to be employed

on crowded pews. A city grew

around the great cathedral’s walls.

while prayers and supplications flew

of  bells, as loud as God’s own voice,

while generations slipped away.

In latter days, in disarray,

in groups with cell-phones or alone,

to photograph and contemplate

Posted by Richard Fleming at 10:49 pm