Many will be familiar with the poem, Adlestrop, by Edward Thomas, probably one of the most anthologised poems of the Twentieth Century.

Its charm lies in its sense of peace, combined with the irony of being written just four weeks before the beginning of the First World War.

As NATO and the Western Powers blunder towards World War Three, which, some would contend, has already begun, it seems apt to revisit (or maybe not revisit) Adlestrop. 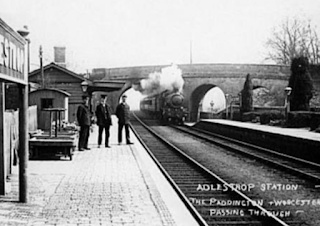 The train stopped, sighing, but I missed the name.

Passengers hurried away, others came:

but while we waited, I heard no birdsong,

just sombre silence till we moved along.

Posted by Richard Fleming at 6:43 pm No comments:

The image is from the 1956 French film, Le Ballon Rouge, directed by Albert Lamorisseone. 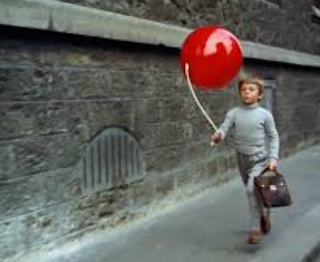 REMEMBRANCE (OR NOT) OF THINGS PAST

At five years old, his world was new,

immediate: as though on cue,

things happened or they didn’t, he

danced through his bright days, heedlessly.

A football or a red balloon

held greater magic than the moon,

a tumble or a bloodied knee

were bothersome, but fleetingly.

When five years old, his memories

were insubstantial as a breeze:

last week, the week before, perhaps,

but, further back, there were no maps.

As to the future, what was that?

His next birthday, a cricket bat,

the thought of schooldays drawing near,

When grown to adulthood, he’d stare

at photographs and wonder where

that child had gone, whom others said

was him, and spoke of games he’d played,

the bat, balloon, the leather ball,

that he pretended to recall

brings a peculiar sense of grief.

Posted by Richard Fleming at 8:57 pm No comments:

Ballyholme was the 'local' beach when I was growing up and was accessible by train from Belfast. It was regarded as the 'posh' end of the seaside town of Bangor, in County Down, and is still popular with dog-walkers and elderly sea-bathers.

Domestic photography in the late 1950s was a fairly hit and miss affair but most families had a 'Box Brownie' camera to take monochrome snapshots that faded or took on a yellow tinge over the years. Unlike the plethora of digital images we have access to nowadays, these old photographs survived, if they survived at all, in drawers or cardboard boxes and the occasional rediscovery of one is akin to receiving an unexpected postcard from the long-distant past. 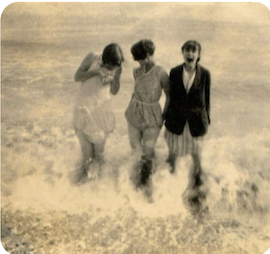 That summer day at Ballyholme,

while I stood there, milk-bottle white,

the three danced ankle-deep in foam,

their voices shrill with pure delight.

A teenage boy, in love, confused,

a problematic way to be,

my heart one minute warmed, then bruised,

I loved, or thought I loved, all three.

Life scattered us, but I recall

that reckless kiss, planned, yet unplanned,

the snap I took, the hasty scrawl,

I love you, in the wave-wet sand.

Though long ago, that day remains

stamped on my heart, so deep, so clear:

the subtle shifting of sand-grains

between my toes, a sense of sheer

the clothes they wore, their faces still.

Posted by Richard Fleming at 10:47 pm No comments:

The poem, Memento Mori, is a personal favourite. It first appeared in my 2017 collection, Stone Witness, and has since appeared in Snakeskin, a highly respected international poetry webzine which previously published a number of my other poems.

parts traffic as Moses did the waves.

Stuck in a jam of steaming cars,

I contemplate how life transforms

in moments. How they wait, those worms,

so patiently, for us, for ours.

Posted by Richard Fleming at 6:45 pm No comments:

In much the same way as painters create self-portraits or insert small cameos of themselves in group portraits, so too does a poet often pen something of himself, often disguised, in his poems. 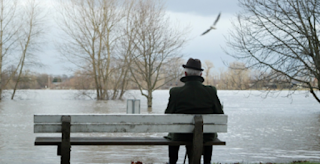 All scattered to the winds and ways,

the friends, he knew when not full-grown,

have vanished from his elder days.

The carelessness of childhood meant

that friendships were a thing to find

If friendships had been coins or gold,

all he had gathered to assuage

the loneliness of growing old.

Posted by Richard Fleming at 6:04 pm No comments:

For over a year I've been posting a poem each day on my Facebook page and rarely do I share any of them on Bard at Bay because the Facebook posts tend to be absurdist verse, quickly read and easily disposed of. Now and again, however, one of those daily rhymes finds its way here and this one's an example of what you can find if you visit my public Facebook page https://www.facebook.com/richard.fleming.92102564/ 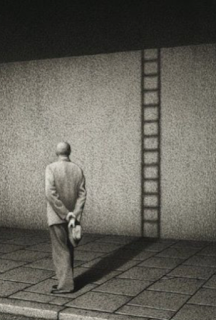 Rex was a jaded retiree

whose joie de vivre was history.

A faded fellow, seen by some

as dull and permanently glum.

He saw a ladder on a wall

that wasn’t really there at all.

The wall itself was real enough,

the ladder, Rex could clearly see,

and yet he scaled it, rung by rung,

with zest he had not felt since young.

Up, up he climbed, small, bony-kneed,

and felt his adulthood recede

with every step. A child again,

he climbed out of the world of men

into a realm where pains and aches

gave way to comic-books and cakes,

his old banjo, its tuneless tunes.

and Jack, his terrier, alive,

who had been dead for fifty-five.

his childhood friends, each hardly changed,

his mother, young and free from care,

his father with a head of hair,

those battered stumps, Rex could recall

from countless summers long ago

this was, of course, the Land of Youth,

Again, he heard his father shout,

who wants to climb this apple tree?

Posted by Richard Fleming at 9:14 pm No comments:

Having experienced extremely hot temperatures in Europe recently and discovered that an escape to the coolness of the bedroom is the perfect antidote, I'm now a devotee of the siesta. After all, if cats do it, it must be a great idea. 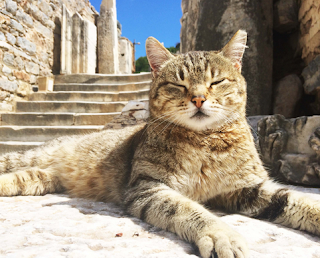 MEDITERRANEANS
In noon-day sun no creature moves
and even lizards, acid-green,
designed for heat beyond belief,
remain within their creviced walls.
Dogs hide away, cats sleep in shade
if anywhere shade can be found
and noon to four the natives sleep
or skulk like fugitives indoors,
the black-clad women making lace,
the men at dominoes or cards.
They have adapted to their world
far better than we have to ours:
at ninety-three they’re still alive
while we burn out at fifty-five.
Posted by Richard Fleming at 11:06 am No comments: